Clara Clarke Steele Cody was a British domestic who immigrated to the United States through Canada in 1924. By 1930, she landed in Atlanta on May Patterson Goodrum’s door-step as a nurse to May’s ailing mother, Mollie. Clara would spend the next seventeen years not only serving as May’s housekeeper but also as a close treasured friend; so close that by 1937, May had a simple cottage, affectionately named the Little House, built on the Goodrum property for Clara, her second husband, Bob Cody, and her son, Kenneth Steele.

While Clara never returned to her hometown of Calverton, Buckinghamshire, England, she maintained ties through correspondence with her parents, siblings Laura, Rose, and Tom, Jr., and a few girlhood friends. Her scrapbooks are filled with photos of her thatched-roof childhood home, cherished pets, a growing cadre of nieces and nephews, and friends in the neighboring town of Wolverton. When war struck Europe in 1939, her concern for her loved ones must have been palpable. 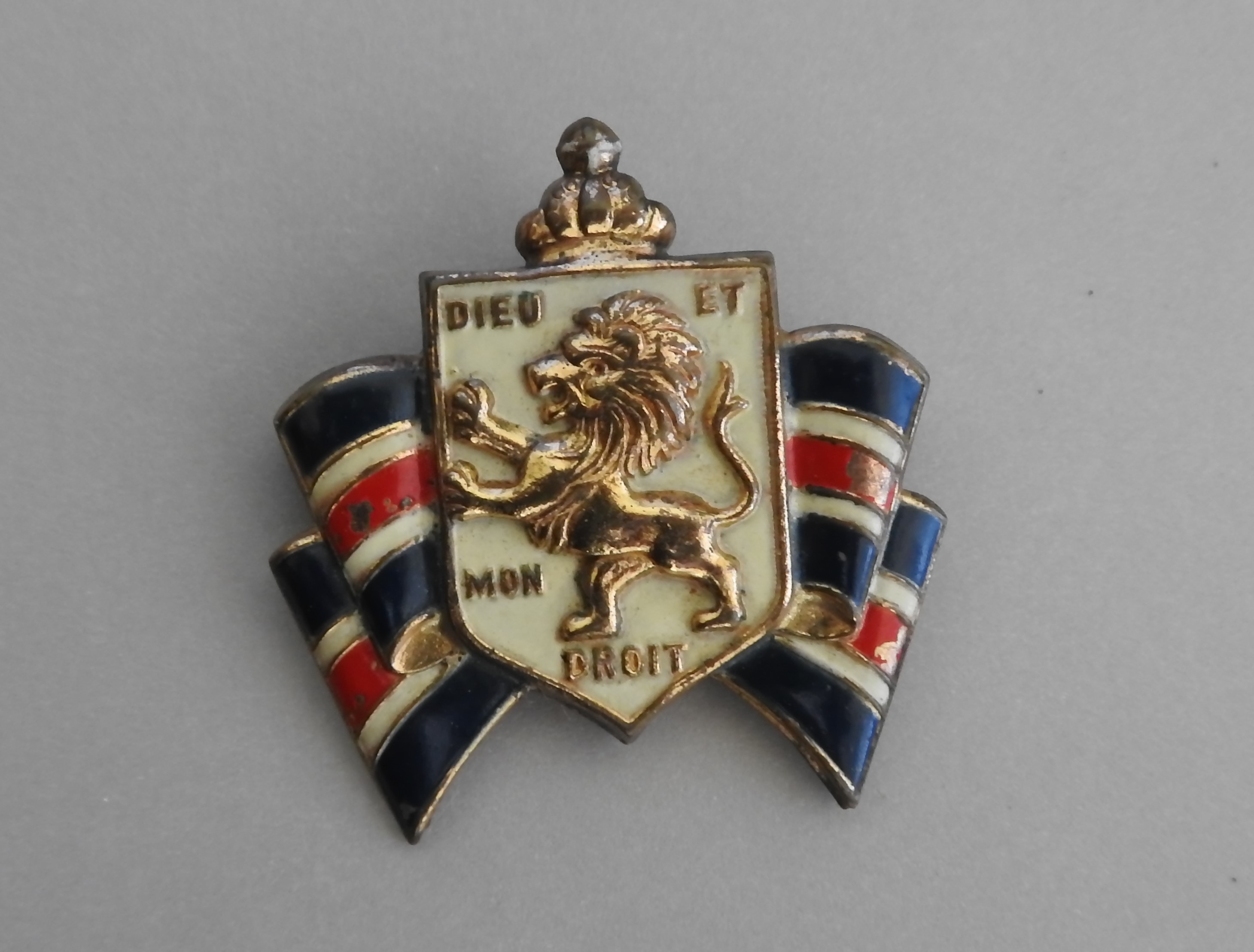 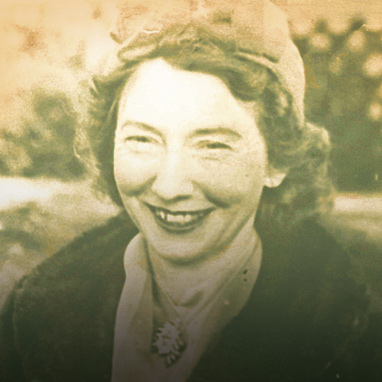 Most of Clara’s history and possessions come to us from her eldest son, Kenneth. One cherished item is a pin nestled in cotton tucked in a simple white cardboard box. Of modest value by today’s standards, it clearly held a special place for the woman who wore it. The gold pin depicts a rampant lion on a white enamel ground with the words “Dieu Et Mon Droit” (God and My Right) emblazoned on a shield topped with a crown and cross. An enamel ribbon of blue, white, and red decorates the background. Engraved in an oval on the reverse are the words “Official B.W.R.S and B.B. By Accessocraft”.

The B.W.R.S. was the acronym for the British War Relief Society and B.B. stood for one of its American partners, Bundles for Britain. Established in 1940 by Mrs. Natalie Wales Latham in New York City, Bundles for Britain was featured in the May 19, 1941 issue of Life magazine. The thirty-year-old single mother of two organized a group of women committed to knitting socks, gloves, hats, sweaters, and scarves for distribution to British civilians affected by the ravages of World War II. The article reported that within sixteen months, Natalie and her team had raised three million dollars, sent hundreds of thousands of used garments, twenty-four ambulances, fifty-nine mobile canteens, and twenty-one X-ray machines to Britain, and their efforts had multiplied into 975 chapters across the United States. The pins, designed by Robert Appleby and manufactured by costume jewelry makers Monet and Accessocraft, were marketed for fund-raising and promoting sympathy for the tragic circumstances in Britain.

Far to the south, Atlanta’s citizens were reminded daily by the Atlanta Constitution of the situation in Europe. While American sympathies were with the people suffering under German occupation, polls showed that US citizens were reluctant for the government to actively participate in the war. By September 1940, news of The Blitz reached Atlanta with the headlines screaming “British City in Flames after Massive Air Raid” and “Nazi Bombers Unleash Greatest Raid on London: Enemy Unloads 50 Explosives in 10 Minutes.” In a Constitution article dated September 5, 1940, Atlanta’s women were challenged to organize their own chapter. Mrs. Albert Thornton and Mrs. Daniel MacDougald accepted the post of co-chairs with bevy of other society matrons volunteering to head various committees. Posting their frequent meetings in the newspaper, their endeavors included a knitting circle, organizing benefit events, and selling the specially designed small gold emblem pins for $2.50, with a reported 90% of the profits benefiting the cause. While Clara had little free time to knit and sew, and less to participate in dances or golf tournaments, she could donate $2.50 from her modest earnings to support her kin and countrymen. She proudly wore the pin as evidenced in the photo of her on the Goodrum estate.

A monetary donation was not the only sacrifice Clara would be asked to make for the war. Her son Ken would soon be graduating high school. As with many young men after the air strike on Pearl Harbor in December 1941, Ken was eager to defend his country and join the fight. Unable to sign on until he finished school, he graduated in December 1942 from North Fulton High School and enlisted in February of the following year, just shy of his 18th birthday. By 1944 Ken was based in California and would finally board a ship for the Pacific. Clara’s fear of losing her son was unfathomable. She broke down in tears while reading his letters. Wounded at Iwo Jima in February 1945, he recovered and spent the remainder of the war with the military police patrolling a base at Saipan in the Northern Mariana Islands.

Clara must have been euphoric at their reunion ten months later. Kennie-Boy, as he was lovingly called, returned home to a joyful household. January 1946 was marked by a telephone invitation to a dance at Oglethorpe University. It was a fateful encounter. Ken decided to matriculate that year on the G.I. Bill, becoming Oglethorpe’s student body president four months later, joining the “B” basketball team, and pursuing his degree in finance. Clara could rest a bit easier knowing Ken was safe, secure, and well on his way to a promising life, free from her legacy of manual labor. But tucked away in a drawer, she kept the pin, perhaps as a reminder of the uncertainty of life, or a talisman for good fortune.