Why the Caged Bird Sings

Having grown up in the Snow Belt of New York and lived with the possibility of “lake-effect snow” falling between October and April, it was impossible that a 10” snowstorm could shut down Syracuse, New York. So when I came across photographs of a snow-covered Goodrum House in Atlanta, Georgia, I had to investigate. In January 2014 most Atlantans probably didn’t realize ‘Snowpocalypse’ wasn’t the largest snowfall in Atlanta. That distinction was set on Tuesday, January 23, 1940. 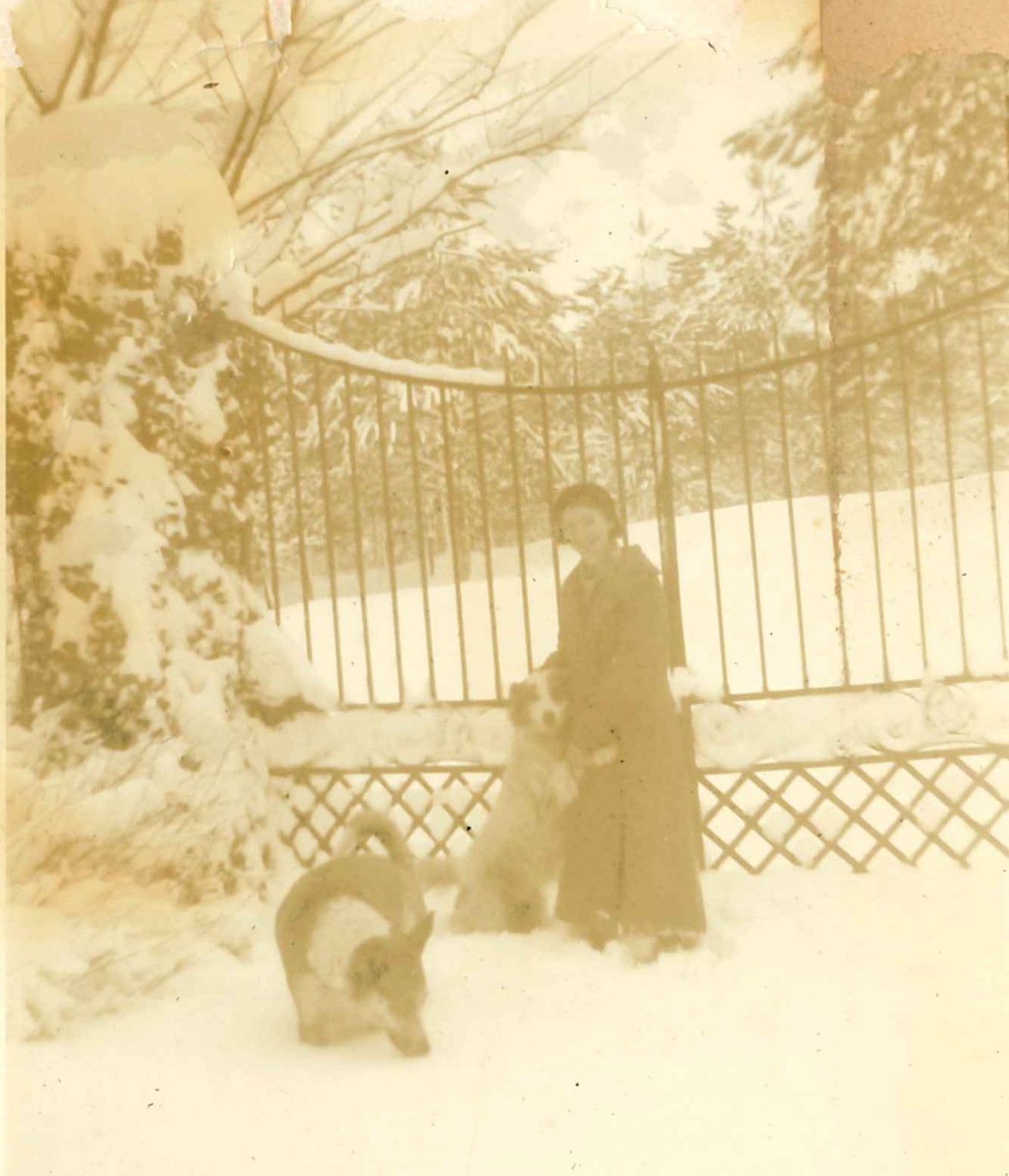 The Atlanta Constitution’s morning headline on Wednesday, January 24, 1940 read “DEEPEST SNOW IN HISTORY CRIPPLES CITY; FREEZE THREATENS MORE TROUBLE TODAY”. Georgia was blanketed in snow from her northern mountains to as far south as Americus and Swainsboro. Atlanta’s accumulation peaked at 10.3”. While retail stores sold out of overshoes and galoshes, milk and newspaper deliveries were temporarily halted. Residential garbage collection was at a stand-still. All 250 city taxi cabs were in short supply as street cars were overwhelmed with workers trying to return home. By Tuesday afternoon public buildings and retails establishments had closed, and the county courthouse ran with a skeleton crew to field incoming phone calls.

Atlantans, ever resourceful, came up with a variety of activities with which to while away the time. The ‘Snowman Cocktail’ was reportedly the most popular alcoholic beverage in downtown office buildings. Likely a concoction of items found in most office kitchenettes, the recipe printed in The Atlanta Constitution read:
Pure Cream.
Snow.
Sugar.
Season to taste with rye or rum. The rum, experts explained, gives it a sheen somewhat akin to that of a mint julep, and therefore is highly preferable to Southern palates.

Housewives pulled out their recipes for ‘Snow Ice Cream’ from four years prior when 8.2” accumulated on their window sills. They scooped it up, mixed it with cream and a little flavoring to serve as a sweet end to the cold evening’s supper.

Schools closed and both teachers and students engaged in snowball battles or showed off their snow-sculpting skills. “Girls Vanquish Tech Men in Bitter Battle of Snow” recounts the details of a snowball fight between merciless girls with superior throwing skills and ill-equipped, overdressed boys. With the December 15th premiere of Gone With The Wind fresh in everyone’s mind, the most popular snow lady was Scarlett O’Hara. Schools would remain closed the rest of the week while sledding, skiing, and ice-skating became fleeting pastimes. 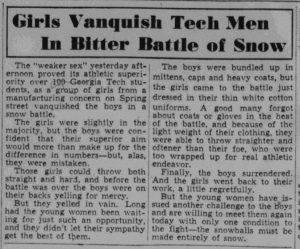 Here at Goodrum House, the residents ventured out with dogs and a camera in hand. Clara Cody, the housekeeper, looks fashionable in her full-length coat as she wades through calf-deep snow in the serpentine garden. Ever present in most the photos is Clara’s canine shadow, Mack, a favorite mutt brought home from the stray dog pound years prior. The photograph of May, pictured in her three-quarter length mink coat, offers a rare glimpse of the stack-stone staircase leading from the Gothic styled camellia house to the rear terrace of the main home. Ken, Clara’s 14-year old son, traipses around the yard in his knit cap and scarf. It was likely the gates to the property remained closed until sanitation crews could remove the snow in residential areas some two to three days later. 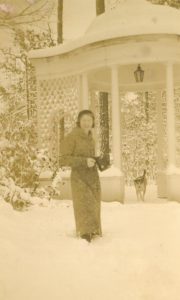 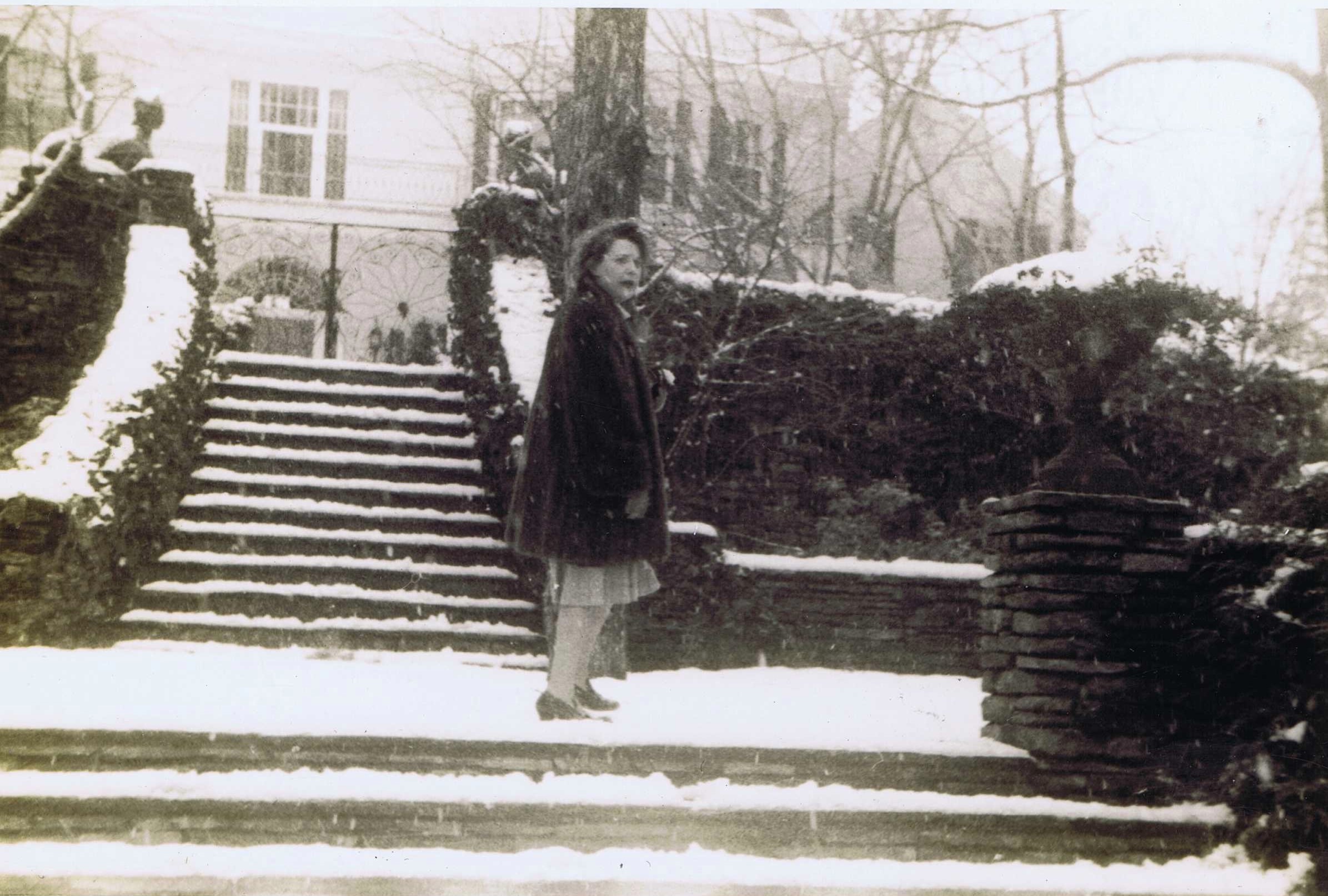 May Patterson Goodrum Abreu on the staircase to the camelia greenhouse 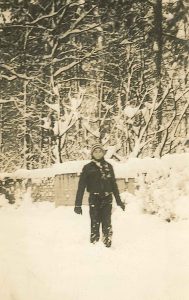